On and off road bike route along the coast to provide safe passage for locals and through traffic. 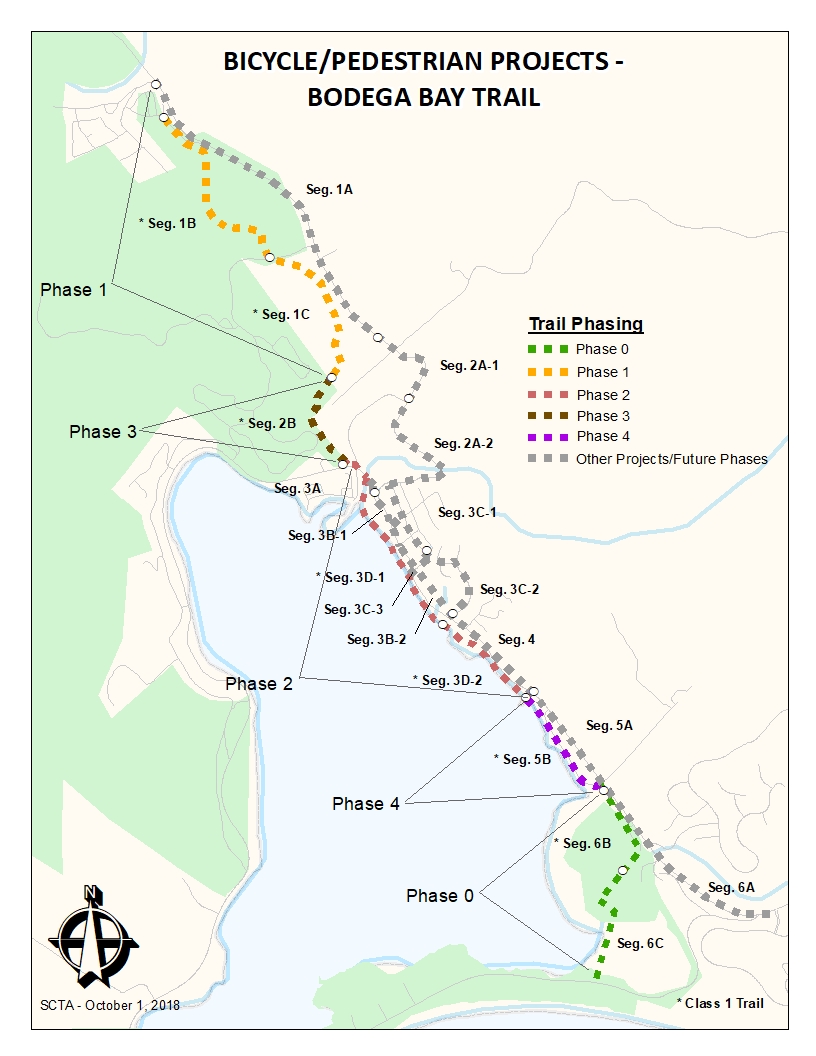 The Bodega Bay Trail will provide a link in the proposed 1,200-mile California Coastal Trail from Mexico to Oregon. The trail will provide a separate northsouth route through Bodega Bay to improve safety of pedestrians, bicyclists, and motorists. The trail will connect State Parks, County Parks, retail shops, restaurants, businesses, and scenic overlooks of Bodega Bay Harbor along the Highway 1 corridor. Users will experience the village atmosphere of Bodega Bay and have access to the beautiful Sonoma County coast, historic harbor, and picturesque waterfront.

The Bodega Bay Pedestrian and Bicycle Trails project is proposed to complete off road (Class 1) pedestrian and bicycle trails and on road (Class 2) shoulder improvements along approximately four (4) miles of Coast Highway 1. This project is based on the scope of work and segments identified in the “Bodega Bay Bicycle and Pedestrian Trail Study” completed in September 2005. The project is divided into segments, which Sonoma County Regional Parks will use to deliver the Class 1 project in phases, as funding becomes available. Sonoma County Transportation and Public Works will use segments to deliver the Class 2 and Class 3 project in phases, as funding becomes available.

Phase 1 – Segments 1B & 1C – Coastal Prairie Trail
The Coastal Prairie Trail (Segments 1B & 1C) starts at Keefe Avenue, continues though Sonoma Coast State Park and ends at the Nicholas Greene Memorial Bell Tower (1.1 miles). Segment 1C (Northern Coastal Prairie Trail) will be constructed first and will connect
the Bodega Bay Community Center to the Bodega Dunes Campground entrance road.
This trail segment includes two boardwalks, an 8-foot-wide trail of stabilized aggregate with
shoulders and signage. This phase of construction will include tree removal, brush clearing, and trail mowing for the entire 1.1-mile trail in anticipation of future funding for construction of Phase 1B. The trail will end in this phase on County land near the existing Nicolas Green Memorial Bell tower monument until completion of the 0.6 mile long Segment 1B.
Project Status / Schedule
Regulatory permits and approvals for the entire Coastal Prairie Trail were received in late 2013. Due to funding constraints, the project will be built in two phases. The Coastal Prairie Trail (Segment 1C) is anticipated to start construction in 2014 completing Segment 1C in 2014 and Segment 1B in 2016.

Phase 2 – Segments 3D-1, 3D-2, 5B & 6B
This 1 mile phase of the Bodega Bay Trail starts at Bay Flat/Eastshore Road, continues and ends at the northern end of Smith Brothers Road.  The 8-10 ft wide multi use trail will consist of a paved surface and elevated boardwalk.  Other improvements include interpretive and directional signs, striping and bollards.  Environmental and Design work has started.

Project Status / Schedule
Additional funding is needed to complete Phase 2 of the project.  During the preliminary Design phase additional community and individual meetings will be conducted to solicit input from property owners, residents and local businesses bordering the project.  an Initial Study (CEQA) is planned for FY20/21 after studies for Phase 3 and Phase 4 have been completed.

Phase 3 – Segment 2B North Harbor Coast Trail
The 0.32 mile trail segment starts at the Bodega Bay Community Center, continues through the Bodega Bay Dunes Campground and ends at Bay Flat / Eastshore Road.
Project Status / Schedule
Environmental and Design work has been started. An Initial Study began in 2016 and is expected to be completed in 2019. Funding for Phase 3 has been secured from the State Coastal Conservancy, Regional Parks Foundation, Parks Mitigation Fees and Measure M.  Additional funding is needed to complete this phase of the project.