There are two distinct elements to this project, the improvements at various locations along Arnold Drive, which would be constructed in phases 1, 2, and 4, and the improvements at the intersection of Hwy 121/116 (Phase 3). Phase 3 requires coordination with and Project Study Report (PSR –Scoping Document) approval from Caltrans and SCTA will serve as the sponsor. 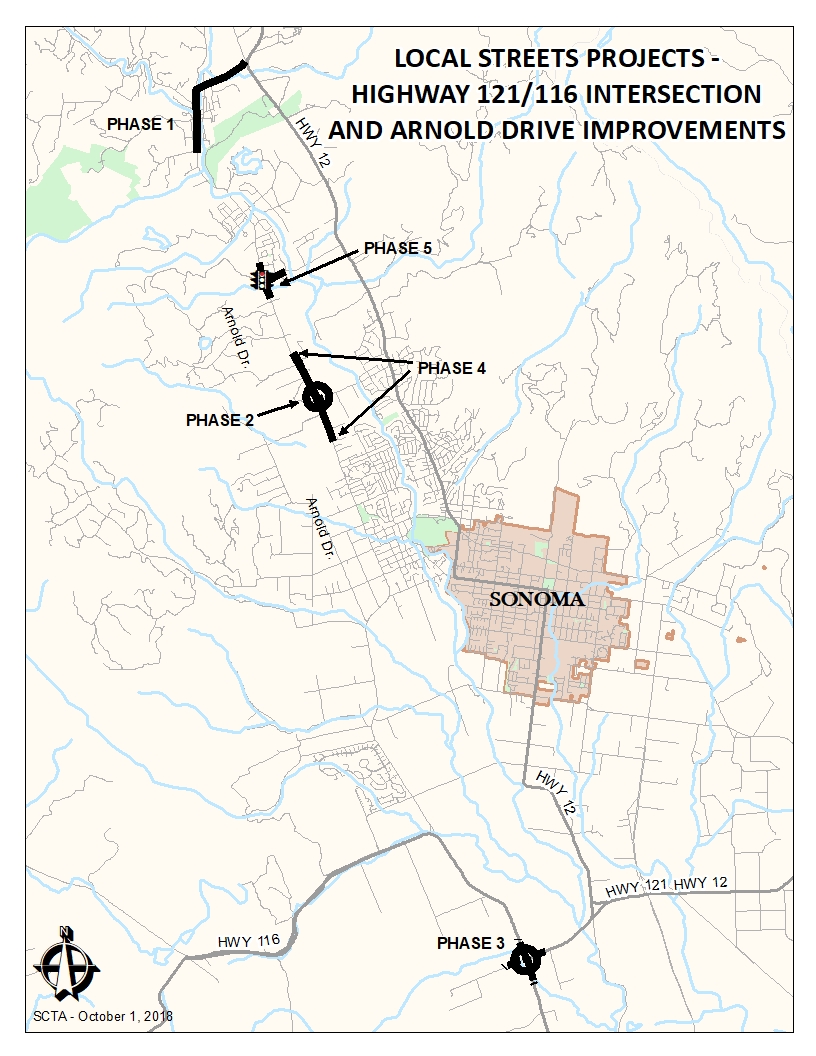 This project would remove a right turn lane and install a traffic signal or roundabout at the intersection of Highway 121 and 116. The project would relocate the park and ride lot, replace the Yellow Creek Bridge as part of the signal project, and widen the roadway to allow for turn lanes into and out of existing commercial properties. The capacity of the park and ride lot would be increased from 47 spaces to approximately 94 spaces. The Arnold Drive improvements would include adding traffic signals or roundabouts, shoulder widenings, and center turn lanes at various locations. This project is both a congestion relief and safety project.

Project Details:
There are two distinct elements to this project, the improvements at various locations along Arnold Drive, which would be constructed in phases 1, 2, 4 and 5, and the improvements at the intersection  of Highway 121/116 (Phase 3).  Phase 3 requires coordination and approval from Caltrans as the owner of the facility.  SCTA will serve as the sponsor for Phase 3.  The County of Sonoma will be the lead on the other four phases.

Phase 1 – Widen of Shoulders on Arnold Drive from just south of Glen Ellen to north of Hill Road
Project Status/Schedule
Construction was completed in July 2012.

Phase 3- Replace the existing stopped controlled intersection at Hwy 116 and Hwy 121 with a Signalized intersection or a Roundabout
Project Status/Schedule
The Project Study Report was completed September 2013.  The Environmental Documentation for compliance with the National Environmental Policy Act / California Environmental Quality Act (NEPA/CEQA) and project approval were completed in April 2018.  The final environmental document is linked here: Volume 1, Volume 2. Visual simulations of operations of the preferred alternative can be found on YouTube here.  Design is expected to be completed by 2022.  The current cost estimate for this project is approximately $24 million. The California Transportation Commission approved this project to be included in the 2020 State Highway Operation and Protection Program on May 13, 2020 and the project is now fully funded and can start construction in 2023. A separate project information sheet is available here.

Phase 4 – Widen Shoulders on Arnold Drive between Country Club Drive and Loma Vista Drive
Project Status/Schedule
No work has started on this project.

Phase 5 – replace the existing stopped controlled intersection at Arnold Drive and Madrone Avenue with a signalized intersection or roundabout
Project Status/Schedule
No work has started on this project.

Measure M Programming Capacity:
A total of $5.98 Million of the $7 Million in Measure M – LSP identified in the Measure M Expenditure Plan has been programmed ($1.02 Million remaining). The County and
SCTA have agreed to proportion the $7 Million in total capacity with $5 Million going towards Phase 3 and the remaining $2 Million towards the other phases.